As a Node.js developer, you know just how large (in terms of number of files and directory size) node_modules can be (you’ve probably aready seen the memes). But have you ever asked WHY? I hadn’t, up until recently, after which I did some goofing around on the interwebs out of curiosity.

Turns out it has to do with 2 things:

npm differs from other popular package managers such as pip and RubGems in terms of how it resolves dependencies. npm may download multiple versions of a package where as pip/RubyGems will attempt to find a single version that satisfies all its dependents. 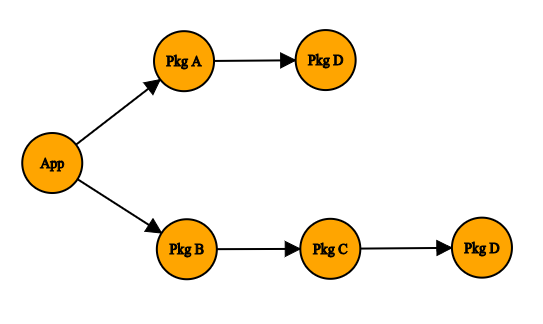 On the other hand, pip/RubyGems will download 1 version of Package D which satisfies Package A and Package C. 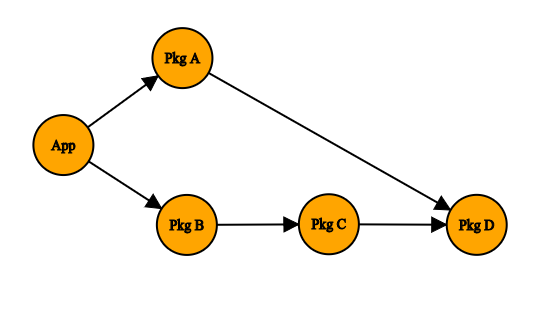 At first glance, the pip/RubyGems strategy might seem like the better approach but each has its pros and cons.

While the pip/RubyGems dependency management approach conserves space, it can lead to “dependency hell” i.e a situation where the package manager is unable to find a version of a package that satisfies all its dependents. In such a case, the developer will have to fix things manually. This may involve upgrading/downgrading one or more dependencies and/or eliminating them entirely. As you might imagine, this can be a pain. Doing the job of a package manager is not fun. And should you decide to downgrade a package, you might be opening up your app to vulnerabilities. As your app grows and you add more dependencies, you are more likely to face dependency hell.

The npm approach solves the dependency hell problem. If Package A requires v2 of Package D and Package C requires v5 of Package D, npm will download both versions. This is neat, but it doesn’t come without its challenges. As you are already well aware, your app bundles become very large. But there’s another problem that could occur in this approach. If you have one or more packages that expose a dependency as part of their interface, you might encounter version conflicts. For instance, if you have the latest version of React as a dependency in your project and you also have a component library dependency that uses an old version of React, you’d most likely encounter compatibility issues that might not be easy to detect at first glance. With the pip/RubyGems approach, you’d catch the problem pretty much at the start while trying to install the dependencies. Fortunately though, npm has a solution for this: peer dependencies.

Looking at these 2 dependency management strategies with the merits and demerits in mind, the npm approach seems like the better one to me, but I may be biased.

The Node.js community is “notorious” for building very small packages. It’s also big on reusing as much code as possible. The end result is npm packages that can easily contain a dozen or more dependencies which in turn have their own dependencies. Take Knex for example. As at the time of writing this article, it has 17 direct dependencies — dev dependencies not included (npm ls --only=prod --depth=0 | wc -l) — and a total of 257 dependencies (npm ls --only=prod | wc -l). This means if you start and new Node project and run npm install knex, you’d have 258 dependencies on your hands right off the bat!

One could argue that this pattern of building small packages and using lots of dependencies is fueled by npm’s dependency management strategy. If npm used the pip/RubyGems approach, Node.js developers would be wary of having many dependencies for fear of dependency hell. Perhaps there’s just one reason for the Node.js black hole. Having explored it, it seems pretty reasonable to me!