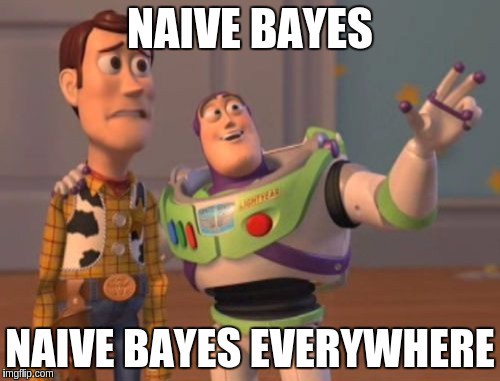 Naive Bayes is a classifier just like K Nearest Neighbors. The Naive Bayes algorithm applies the popular Bayes Theorem (used to calculate conditional probability) given by the formula:

Here’s a great explanation to read if you’ve not come across/don’t understand the theorem yet: https://betterexplained.com/articles/an-intuitive-and-short-explanation-of-bayes-theorem.

Let’s consider the data we used in the last post on KNNs:

In Naive Bayes, we calculate the probabilities of an input feature set being in each of the classes in the data and return the class with the highest probability as the predicted output.

How do we find the probabilities for each class?

Let’s put the formula into context for better understanding:

Probability that a person is Male

Substitute Female for Male in the formula and you have the probability that a person is female.

The probability of selecting a person from a given class is the simplest calculation to perform. From the data table, we can see that there are 5 samples. 2 are Male. Thus P(Male) = 2/5. And 3 are Female. Thus P(Female) = 3/5.

The PDF can be computed using the following formula:

Substitute Female with Male and/or weight with height to calculate other PDFs.

These are assumptions and are not completely true most times for a given data set. As such, we’re being “naive” by assuming.

Next, let’s find P(Class) for Male and Female:

We need to find the various means and variances required to compute the PDFs:

Now to the PDF formula in code…

Let’s define a function as we’ll use it severally:

Putting everything together, we have:

Don’t forget to check out the ML Chops repo for a more robust and efficient implementation: https://github.com/nicholaskajoh/ML_Chops/tree/master/naive-bayes.

If you have any questions, concerns or suggestions, don’t hesitate to comment! 👍